In 1993 the Town of Oliver connected a new housing development adjoining Tuc El Nuit Lake to its wastewater collection system. The sewer extension design required the property developer to acquire easements across rear yards of over 30 privately owned properties along the lakefront. The lakefront homes were served by individual septic systems that would be abandoned and replaced with new 4” (100mm) SDR35 PVC pipe side sewer connections. A new gravity fed 8” (200mm) SDR35 PVC sewer line, 2,750’ (800m) in length with 17 manhole structures, was constructed between the Scott Road and Rotary Beach lift stations. To the annoyance of its residents, this new line was located in their backyards to allow for gravity conveyance of their homes’ sewage. Predl Manhole Base Liners were specified. Per conventional 1993 practices, Corprotect Concrete Protective Liner (CPL) was not specified for the manhole barrels and lids.

The sewer line’s first ten years of operation was relatively uneventful. From the beginning, the neighborhood reported mildly irritating sewer odors. At the time it was concluded the odor was due to sewage volume insufficient to support a self-cleansing flow velocity of 2 feet per second. Manhole vents were constructed to manage the odor. Their vent stacks were “hidden” in adjacent trees.

In 2002, the situation changed dramatically when a 2.1 mile (3.4km) force main connected to their sewer line. The principal user of this new connection was a Beverage Plant. The lakeside neighborhood started to complain vociferously to the Town of Oliver staff and officials about a new, repulsive stench.

The Town’s first approach to eliminating the odor was to remove the long vertical tree vent stacks. The odorous gases continued to escape by travelling up the side sewers and escaping through each of the houses plumbing roof vents. The Town installed charcoal filters, but they proved unsuitable due to continued odors coupled with a high maintenance frequency. The Town then installed P-Traps (similar to typical plumbing underneath a kitchen sink) on the 4” PVC service lines between the homes and their connections to the 8” PVC gravity sewer line. The P-Traps succeeded in preventing the odor from travelling to the roof vents, but concentrated the odor in the 17 manhole structures. As a stop-gap measure, wine corks were inserted in the manhole cover pick holes. Finally, the manhole covers were placed inside plastic garbage bags and buried under 4” (100mm) of soil. This measure successfully controlled the insufferable odor, but created an anaerobic environment inside the 17 manholes.

Force Main effluent commonly creates H2S gas as pump stations do not always run consistently. Intermittent flow coupled with long residence time creates fertile conditions for H2S gas. The effluent creating the odor complaints was tested at a Biological Oxygen Demand (BOD) of 14,000 and pH of 4. BOD of 700 is considered high. In addition unreported “event spills” occurred where vats of alcohol spilled into the sewer system. The Beverage Plant is a high volume year-round production facility. Some production is bottled wine from locally grown grapes, but significant production is the processing and bottling of unfinished wine grape concentrate into table wine. No measures were taken to pretreat the Beverage Plant’s high strength wastes. As a result, the combination of a large industrial beverage plant connected to their primarily residential public wastewater system overwhelmed the small Town of Oliver’s (pop. 5,000) sewer system. Major trouble for the Town’s public sewer system started in September 2007 with the collapse of the Main Sewer 36” (900mm) Interceptor Reinforced Concrete Pipe that was 25’ (5m) below the street outside the Public Works building. This was the Main Interceptor Line connecting the Town’s Wastewater Collection System to the Wastewater Treatment Plant. The town quickly replaced the imploded line with PVC pipe and “IPEX” PVC manhole structures. IPEX’s PVC Manhole System uses Predl Systems Manhole Base Liners.

During the summer of 2010 the Town contracted a third party to high pressure wash and inspect all of the manholes in the Tuc El Nuit sewer line and report on their condition. The report is primarily photographs documenting the condition of each manhole. The report bluntly notes “Heavy black scum … black scum … Stinky … Very Stinky.” The photos consistently illustrate the interior walls of the manhole barrels being covered with “heavy black scum” with severely decayed and eroded concrete exposing rebar, aggregate and sometimes soil from outside the manhole structure.
In contrast the molded plastic “bench and gutter” (Predl FRP Manhole Base Liners) are absolutely uncontaminated by the Beverage Plant waste effluent. In fact, the Predl base liners (and the precast concrete behind the Predl liners) were 100% intact and operational. 20 years of H2S gas and 10 years of virulent “winery waste” discharge did not affect the Predl liners’ integrity or performance. Mike Johnson Excavating Ltd. was contracted to replace the decomposed manholes. Mike described the remnants this way – “. . . the barrels were garbage, done . . . badly decayed . . . in terrible shape . . . (the effluent) didn’t hurt the liner at all . . . the [Predl] lined pre-bench was fine.”

Replacing All of the Decayed Manhole Structures

Steve Underwood, P.Eng. of TRUE Consulting in Kamloops, BC was retained to find a solution for Tuc El Nuit Lake’s 17 failed manhole structures. Following examination from 20 years of extreme atypical conditions, TRUE Consulting proposed that the Town replace the decomposed concrete manhole barrels entirely but continue to use the surviving Predl lined manhole base structures as the foundation for the replacement concrete barrel sections. The connections between the 8” PVC pipe system and the gasketed manhole base inverts were still secure and watertight. The bench and gutter material showed no signs of degradation or abrasion. The Predl-lined bases remained in their original condition after 20 years’ service and were deemed capable of supporting the replacement lined precast concrete barrel and lid sections. Further, TRUE Consulting had enough confidence in the integrity of the Predl-lined bases integrity and watertight pipe connections that the sewer line was to remain “in service” (i.e. live flow) during the entire construction process. This saved the Town the cost of bypass pumping and the homeowners the inconvenience having their water shut off for the duration of the project.

End-to-end the entire project was efficiently implemented according to plan by following the design and recommendations of TRUE Consulting.

It is easy to speculate that had the manhole bases not been protected by Predl Base Liners the entire manhole structure would have required replacement. A complete “rip and replace” construction project would have been vastly more expensive and taken much longer. It is hard to imagine how the Town of Oliver and the Tuc El Nuit Lake neighborhood could have coped with such an extremely intrusive construction project and the sewer line running through many of the resident’s backyard. The Public Works department was relieved to not deal with the financial, social and political costs which likely would have been associated with an event similar to the Main Sewer line collapsing.

In retrospect, I&I surely had been prevalent due to high groundwater levels and decomposed barrel sections. Going forward I&I levels should be very low with the fully lined structure and sealed barrel joints with gasketed pipe connections. It is worth noting that during 20 years of the sewer’s operation there was no reported evidence of exfiltration and the ecological damage this could have caused if the concrete manhole bases were unprotected by Predl’s liner technology. 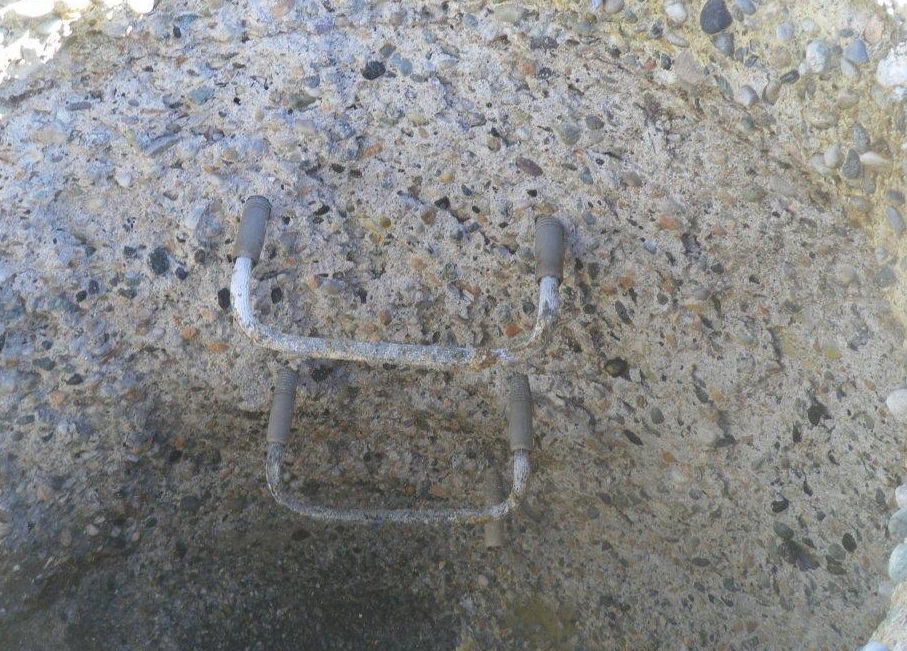 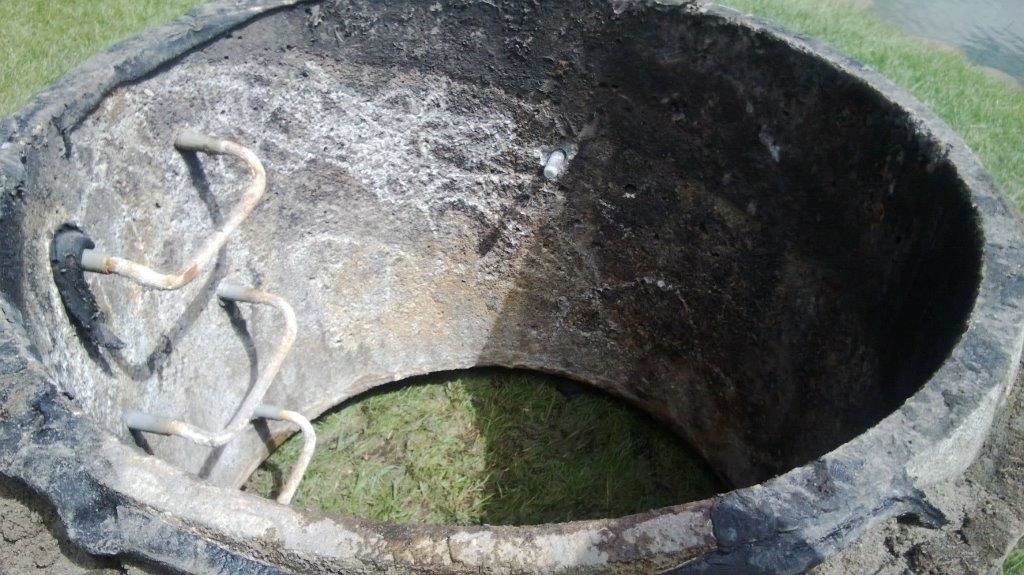